Called to the Unexpected 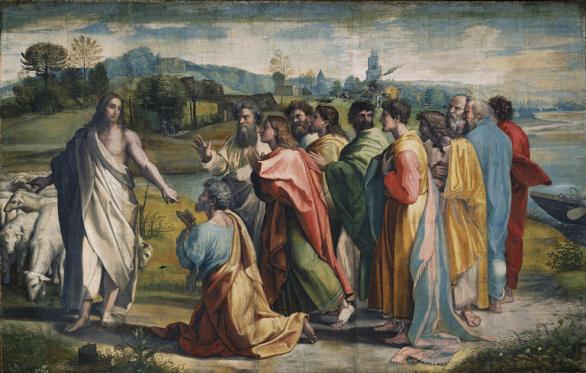 In the midst of all the frustration that had reached a boiling point last week, I almost gave up. However, there was a moment I was asked to lead my church's youth group through a small portion of Matthew while our youth pastor was away. To lead with a little back-story my wife and I joined the youth group nearly a year and a half ago and have been loving every minute of it. Though to try and write a lesson while feeling downtrodden is certainly not easy, and I'm not one of those people who can write a lesson or study out of simple habit. When I talk about something I do research, fact check, and get into the information so that I can feel confident saying what I believe.

I'll give you a primer into the lesson that I've been working on all this last week. It's on Matthew 4:12-22, which is the beginning of Jesus' ministry and the point where He calls the first disciples. I found it quite ironic, because the past month I have not been feeling called by God to do much of anything, and that's where we will begin.

Now when he heard that John had been arrested, he withdrew into Galilee. And leaving Nazareth he went and lived in Capernaum by the sea, in the territory of Zebulun and Naphtali, so that what was spoken by the prophet Isaiah might be fulfilled: the way of the sea, beyond the Jordan, Galilee of the Gentiles— the people dwelling in darkness
have seen a great light,
and for those dwelling in the region and shadow of death, on them a light has dawned."

From that time Jesus began to preach, saying, "Repent, for the kingdom of heaven is at hand." While walking by the Sea of Galilee, he saw two brothers, Simon (who is called Peter) and Andrew his brother, casting a net into the sea, for they were fishermen. And he said to them, "Follow me, and I will make you fishers of men." Immediately they left their nets and followed him. And going on from there he saw two other brothers, James the son of Zebedee and John his brother, in the boat with Zebedee their father, mending their nets, and he called them. Immediately they left the boat and their father and followed him. (Matthew 4:12-22 ESV)

While I spent most of my time staring at these verses in Matthew I wondered what I would share with the youth. Would I talk about the miserable things that can happen in life, or recount a personal life experience? No. The very idea about talking in public about myself scares me, and I often talk better about myself behind the mask of pages and words.

So after 30 minutes, I started writing the lesson. Painful word and phrase started coming out until I stopped and prayed. I prayed for guidance and direction. From there, the story started to unfold, and I saw for the first time, in a long time, that I was the largest problem in my journey. No one else was to blame except for the captain who was steering this ship astray.

And we know that for those who love God all things work together for good, for those who are called according to his purpose. For those whom he foreknew he also predestined to be conformed to the image of his Son, in order that he might be the firstborn among many brothers. (Romans 8:28, 29 ESV)

When a bad or good circumstances happen in our lives, as believers, we must remember that God works all things together for the good of those who believe in Him and are called by Him. The study I ended up writing was about being called. Being called by Jesus into His ministry. That doesn't mean we have to be preachers, deacons, or choir directors. We only need to follow the calling. In life we get caught in these notions that we make our own paths, and while that is true, God calls us to a perfect path for our lives. When we deny that path we are miserable, like myself, and find little to no cheer in a life lived that way. However, when we accept the direction God has for us then we are living a life called to His side, and are fulfilled.

What does it look like to be called? It's different for every individual. I could look at my own church and tell you at least a hundred different ministry directions by watching the people walking through the front door. With so much variety in the body that means that His plans for you are perfectly perfect. He has crafted a similar unique and wonderful path for you. Be conformed to the image of His Son, Our Lord, and find the path He has paved for you.

CDO of Hounder and Owner of Huffernickel. He is a Christian, husband, father, writer, developer, designer, and a digital carpenter crafting amazing web experience. Also created the Centurion Framework many moons ago.

Why not let it come from me?

There is only one thing that I like more than writing and that is sharing what I have written with the amazing people on my newsletter list. So why not join the newsletter mailing list today and I promise you will get the latest writings I have.